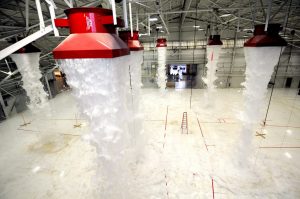 Choosing a Deluge or Pre-Action System to Protect Your Facility

What is a Deluge System?

A deluge system is a dry fire protection system that the piping for the system is empty and at atmospheric pressure with the sprinkler heads all open.  When the system detects heat and or fire, the deluge valve will release water, dry chemicals, inert gases, or foam. The type of agent that is used depends on the type of system for the hazard and location being protected.  The system piping will then be filled with water or another agent and it will be released by all sprinkler heads simultaneously, blanketing the area to control the fire.

Deluge systems are generally used when an entire area needs to be protected immediately instead of by zone or location of source of heat or fire.  This system is used most typically for:

A deluge sprinkler system works well in protecting high hazard areas that could cause deadly fires because of its ability to quickly flood an area to prevent the fire from expanding.

What is a Pre-Action System?

For a pre-action system to discharge, two steps must occur:

Talk to a Fire Protection Expert

These types of systems are used in cold weather applications where water could freeze in the pipes and the system would be damaged.  They are typically used in high hazard areas and also areas where you want to protect highly sensitive objects.  When choosing a fire protection system, a fire protection company will be able to help you distinguish what type of system works best for your application.  They will work with you to make sure that the type of system you need to install will meet the building codes set by the NFPA, your insurance company, and or the Authority Having Jurisdiction(AHJ) for your area.