A fire sprinkler contractor’s truck pulls into a familiar parking space. The technician is greeted by the maintenance supervisor and together they head over to check out one of the live fire sprinkler systems that requires service. The building owner has a small renovation project and needs some sprinkler heads moved to accommodate the changes taking place. This is an ordinary day for both the sprinkler technician and the maintenance supervisor, maybe even boringly so.

Most horror stories take place on ordinary days, and they begin just as the participants of the story are comfortable in the story’s setting. The technician and maintenance supervisor work together to carefully trace the system piping back to the origin. The technician then sets up a ladder and begins a typical work day. He reaches the top of his ladder and removes the first sprinkler head, but quickly realizes something is wrong. Suddenly, sprinkler water that looks as black as coal blasts out of the now open outlet. The water pressure increases heavily as the building’s fire pump kicks on to support the water flow. Terrified, the sprinkler technician and maintenance supervisor desperately scramble to find a shut-off valve to minimize the flood damage. 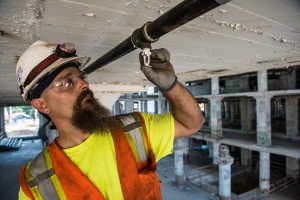 Josh Klein, a sprinkler fitter with Grunau Company, has 26 years of experience in the industry. Years ago, Josh found himself in a similar situation as the sprinkler technician in the story above.

“I was working for another company in Columbus, Ohio at the time. I was called out to a bank to make some changes to their sprinkler systems. I asked maintenance several times if they were sure the correct system was off and they assured me that was the case. As soon as I pulled that sprinkler head, the water pressure hit me so hard that it knocked me off the ladder.”

The bank in Josh’s story was also a larger building with multiple live fire sprinkler systems. This type of setup is common in many major commercial and industrial facilities. As changes in these facilities are made over the years, systems can easily crossover into areas occupied by other systems. Memories fade and eventually, there may not be a soul in the facility that knows exactly where every individual sprinkler system begins and ends. 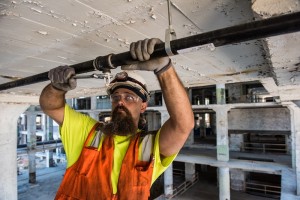 Whose Fault is it Really?

The story above may sound a bit over-dramatic. After all, if you ask any person to list one of their greatest fears, being caught in a sprinkler water flood is probably not at the top of the list. For a building owner, this type of incident can be a major catastrophe. The worst case scenario for this type of predicament is a legal battle to determine who will be financially responsible to repair damaged property. Furthermore, an excellent business relationship that probably took years to cultivate can be irrevocably damaged in an instant.

Working on live fire sprinkler systems will always carry some inherent risk. Often times, the work is unavoidable as buildings undergo various repairs and renovations throughout their lifespans. Since the activity itself cannot be bypassed, the next step is to try and manage the risk. Dave Hassay, a service manager at Grunau Company, described the traditional risk management techniques of sprinkler technicians:

“If you weren’t sure you had the correct system shut down, you would want to shut down every nearby system to reduce the risk. The techs that have been doing it a while, if they take their time, they can feel when a sprinkler head is under pressure and turn back before it is too late.”

Dave acknowledges that the traditional techniques still leave too many unpredictable outcomes to chance. Along with others at Grunau Company, Dave has helped implement the use of a new tool in an attempt to help shrink the margin of error. Sure-Off has become a common tool inside many sprinkler service vehicles. As with all newly implemented tools, initial opinions will vary. Josh Klein is a big fan of this new product. In fact, Josh only had one complaint about Sure-Off:

“I am mad that I didn’t invent it; if I did, I would be retired sitting on a beach somewhere right now.”

The operation of the Sure-Off is pretty straightforward. The device seals around a piece of 1-inch diameter piping on a live fire sprinkler system. Once sealed, the technician drills into the sealed piece of piping. If the system is live, water will instantly flow through the drill penetration and pressurize the gauge located on the Sure-Off device. At this point, the technician will know that the system they need to work on is still live and in service.

Although efficient and safe, the Sure-Off device can only currently be used on 1-inch diameter sprinkler piping. The installation process does take some time out of the sprinkler technician’s day, but the device mitigates risk by minimizing the potential for human error. When utilized properly and consistently, Sure-Off inspires confidence in both the technician and the building owner.