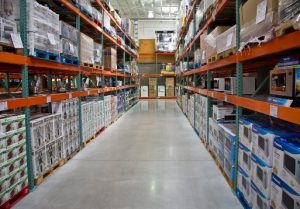 Protecting Your Warehouse from a Fire

According to the National Fire Protection Association, 1,210 warehouse structure fires were reported each year during 2009-2013. These fires caused $155 million in direct property damage, 19 civilian injuries, and 3 civilian deaths on average per year.

When a fire starts inside of a warehouse it can spread very quickly unless contained. In-rack sprinkler systems help to stop the spread of a fire within a specific rack storage area. This prevents the fire from spreading to other parts of the building. In-rack sprinklers have a network of pipes that surround the racked structure and target a specific area.

ESFR systems often can be used in place of in-rack sprinkler systems. Typically, the ESFR system will provide better protections than an in-rack system. However, there are some limitations to the use of ESFR systems. ESFR systems cannot be used with certain storage configurations or building types.

The Quell fire sprinkler system can be used in cold storage spaces or unheated warehouses. It can be used to protect high piled storage areas. This system surrounds the protected area and douses in with large volumes of water. The Quell system eliminates the need for in-rack sprinkler components which gives you more flexibility with storage configurations.

Rich Fire can install systems that protect your warehouse from a fire. We have the capability of installing in-rack sprinkler systems, Quell systems, and ESFR systems. At Rich Fire, we can help you determine which fire protection system will work best for your application. We also provide fire protection services including 24 hour emergency services. Our team of professionals can inspect your systems according to standards and local code. If you are interested in installing a fire protection system in your warehouse, contact us today.